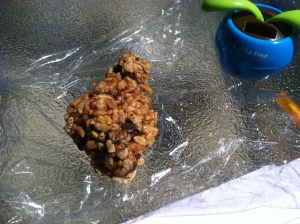 I’m a snacker, for those of you that know me, it comes as no surprise.  Generally speaking I eat three small meals a day and then snack 2-3 times a day.  Studies have found that this method works better to keep ones’ metabolism rolling throughout the day than the traditional three meals a day.  Plus, I love cute bite-sized, finger foods so I’m thankful for the research results.  The hardest problem that I have is finding good snack options that are low in calories and good for the body.  Food is not just something cute, but rather more importantly it is the fuel that keeps the body moving day in and out.

When I came across this recipe, I was really excited.  One of my favorite old snacks were rice crispy squares.  Unfortunately the traditional marshmallows in the stores contain gelatin.  You will be sad to hear (or disgusted maybe like me) gelatin is actually derived from the collagen found in animal bones and skin.  It’s true that these favorite American treats can be made with Vegan marshmallows but can be very, very expensive.  So, until I start making my own (which will probably be a while), I’m going to steer clear of my once favorite snack item.  Sad, I know…  But, thankfully the family loving people over at Sweet Potato Chronicles has come to a great conclusion – peanut butter!  Hello, move over marshmallows and insert ooey-gooey protein packed peanut butter.  Sign me up twice!

While the husband was at work I decided to make these little treats so that we could test them for future camping/hiking trips in the mountains.  Peanut butter is oh so important to vegans hiking in the mountains since its easily transportable protein. The protein enriched rice crispy bars were really easy to put together (dare I say easier than original marshmallow ones?).  The end result was truly amazing.  I believe I would add a little more peanut butter and less agave nectar next time.  That’s personal preference though since we prefer less sugary items.  I would highly suggest adding a little of either one though since there wasn’t quite enough moisture to bind the cereal in to the other ingredients.  The only other thing that I switched up was I used Trader Joe’s Dark Chocolate covered superfruit mix instead of dried blueberries.  Dried blueberries are very hard to find and at Trader Joes’ they are more expensive than the dark chocolate covered superfruit.  So, it was a win-win situation.  I’m sure it would be just as good either way.  Yummy!

The original recipe can be found at:

Place cereal, raisins and dried blueberries in a large bowl. Heat sunflower seed butter and agave over medium-low heat until warm. Remove from heat when it resembles a smooth, thick syrup and add the cinnamon and vanilla extract. Stir.

Pour over cereal mix until completely coated. Pour into prepared baking dish. Using wet hands, evenly pat down mixture into pan. Place in refrigerator for an hour or two to chill. Cut into bars and serve. Keep chilled between servings.